The four videos have been split into four separate articles, for ease of discussion, and referencing. 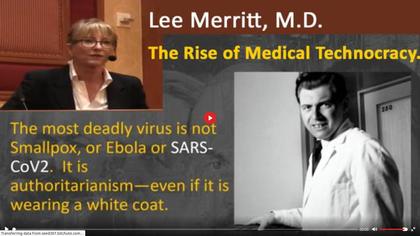 The other three are at

They're all great, but I particularly liked the first one -- SARS-CoV2 and the Rise of Medical Technocracy. Lee Merritt, M.D.. You'll need to watch the video for explanation of the various slides (shown in the image gallery).

There's going to be an awful lot of really angry, embarrassed people when they realize they've been so easily and willfully played. So naive, hard to believe. Like, you know, read the packaging (see image, in CAPITALS mind you (aka yelling!)) "THIS MASK ...WILL NOT PROVIDE ANY PROTECTION AGAINST COVID-19." It's not like it's written in Swahili or anything, it's simple plain English. The last few images starting with psychologist Albert Biderman put to rest any doubts or confusion as to what's really going on.

As the “pandemic” broke out, I constantly watched and read online publications. After reading about the Chinese, Indian, and Korean use of hydroxychloroquine (HCQ), an antimalarial agent, against coronavirus, within an hour I found more than 20 scientific papers, written in the last 40 years on the use of lysosomotropic agents—specifically chloroquine—to treat viruses. Like Rip Van Winkle, I suddenly awoke, after decades, to a completely new medical reality.

Most physicians today don’t learn that the mortality of childhood diseases in well-nourished, unvaccinated, First-World children was negligible prior to the advent of vaccines.

A consummate insider, the former White House Chief of Staff Rahm Emmanuel is known for his admonition that vested power structures should “never let a serious crisis go to waste.” But this treadworn strategy — to use crisis to inflame the public terror that paves the road to dictatorial power — has served as the central strategy of totalitarian systems for millennia.

The methodology is, in fact, formulaic, as Hitler’s Luftwaffe commander, Hermann Göring, explained during the Nazi war crimes trials at Nuremberg:

“It is always a simple matter to drag the people along whether it is a democracy, a fascist dictatorship, or a parliament or a communist dictatorship.

“Voice or no voice, the people can always be brought to the bidding of the leaders. That is easy. All you have to do is tell them they are being attacked, and denounce the pacifists for lack of patriotism and exposing the country to greater danger. It works the same in any country.”

Just scrolled through the slideshow, then the video. Extraordinary stuff. Scary stuff. That slide showing cases vs the steady reduction in deaths ... proof positive we're being manipulated, taken for fools.

Do the people in media, governments experience the slightest shame (rhetorical question. No, they obviously don't!)? The harm they're doing, especially doctors who peddle the usual covid nonsense -- so much for their oath not to inflict harm.