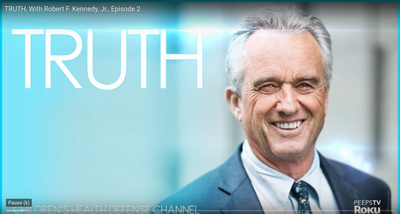 Many who have attended various Byron Sophia groups have said they were vegetarian, some saying they were vegan.

It would seem reasonable to expect that many, if not most of those who attended were also orientated toward "natural healing" and natural living - e.g. eating organic vegetables, enjoying plenty of sunshine, etc.

Within that context, of living a healthy lifestyle, the recent work of Dr Bruce Lipton is salient, in regards to the Corona/Covid-19 epidemic.

In his YouTube video "How never to get sick again"1 he affirms that fear (e.g. fear of getting a virus), is one of the factors in illness.

As he explains, when being chased by a saber-toothed tiger, our ancestors would have used 100% of their energy to fight or run away. The body naturally shuts down our immune system in such circumstances, in order to maximize resources and energy for survival.

He also emphasizes that fear shuts down the generation of red and white blood cells, cellular regeneration, and so on. In short, fear reduces our ability to live in optimal health, with an optimal immune system.

He also points out that fear pushes blood to the back of the brain, somewhat starving our conscious reasoning abilities, and inducing a "reflex" action, again quite relevant when being chased by a tiger, lion or some such. In emergency situations, we don't have time to consciously analyze much of anything other than what immediate action is necessary.

So when we see people scrambling to buy toilet paper, and other panic reactions, it's helpful, vital in fact, to remain calm, centred, and aware of the power of fear to dumb us down, and to induce ill-health.

As to the issue of vaccines, a healthy immune system combined with a powerful, resolute belief in one's own wellbeing will ward off infection. As a result of naturally overcoming an infection, such as measles, we will then have life-long immunity. Not so for artificial processes (vaccines) which, the research is confirming, depletes the immune system due to the many confusing signals sent by artificial compounds including aluminum adjuvants, mercury, aborted human fetal tissue, monosodium glutamate (MSG), formaldehyde, antibiotics, and so on.

It should not be difficult for many to appreciate that those who are unvaccinated, with healthy immune systems will be less prone to illnesses. 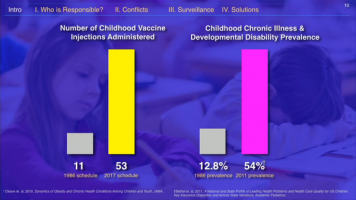 The graph (right, below from the "Part 1, One Conversation, Atlanta," video) shows the correlation of the number of vaccines with that of childhood illnesses and disabilities.

From "One Conversation" channel featuring Del Bigtree, Dr Sherri Tenpenny (and others)

Compendium of helpful websites (not in any particular order)

Flu shots are for dummies

This video is light and easy, about why flu shots which include all sorts of toxic nasties, are for dummies. Those who do a modicum of research will avoid the flu shot (and all vaccines) "like the plague".

Following on (started auto-playing) after the previous youtube video, is the following video about natural healing (using Vit. D). YouTube usually censors natural wellness methodologies, especially when they include pro-choice (anti-vax) content, as is detailed in the previous comment's video.

It's often advised that in order to figure out what's really going on, just follow the money. So why would Google censor natural remedies to disease that are known to be effective ... and cheap? Well, there's the answer. There's  little to no money in promoting natural remedies (like Vit. D/sunshine, vit. C, etc). As Dr Lee Merritt reveals in her presentation, very few people die from Covid when they have sufficient Vit. D. But hey, Vit. D is cheap (or free when from sunshine), so no point in promoting that, there's no money in it. But an experimental 'vaccine' with many side-effects (requiring expensive down-stream medications)? -- promote promote promote, 24/7.

Maybe they'll censor this and the previous one in due course?