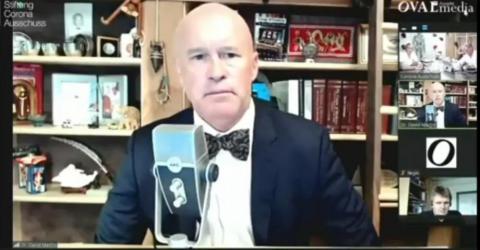 The following quotes are by Dr David Martin in this interview with Reiner Fullmich:

We have reviewed over 4,000 patents that have been issued around SARS coronavirus and we have done a comprehensive review of the financing of all the manipulations of coronavirus...

We took the reported gene sequence, which was reportedly isolated as a novel coronavirus … and reviewed those against the patent records that were available as of the spring of 2020. What we found … (is that there) are over 120 patented pieces of evidence to suggest that the declaration of a novel coronavirus1 was actually entirely a fallacy. There was no novel coronavirus.

We found records of sequences attributed to novelty going to patents that were sought as early as 1999. So not only was this not a novel anything … it’s not been novel for over two decades.

...neither the coronavirus concept of a vaccine, nor the principle of the coronavirus as a pathogen of interest with respect to the spike-proteins behavior is anything novel at all. As a matter of fact it’s 22 years old, based on patent filings.

SARS is actually not a natural progression of a zoonotic modification of coronavirus. As a matter of fact, very specifically in 1999 Anthony Fauci funded research at the University of North Carolina, Chapel Hill, specifically to create … this (following) comes directly from a patent application filed on April 19th 2002, where the NIAID built “an infectious replication defective coronavirus” that was specifically targeted for human lung epithelium. In other words, we made SARS, and we2 patented it on April 19th 2002 before there was ever any alleged outbreak in Asia, which as you know, followed that (patent filing) by several months. That patent (was) issued as US Patent No. 7279327.

Patent no. 7151163 issued to Sequoia Pharmaceuticals (being for a treatment for a coronavirus that was patented by the CDC) … was issued and published before the CDC patent on coronavirus was actually allowed. So the degree to which the information could have been known by any means other than insider information between those parties is zero. It is not physically possible for you to patent a thing that treats a thing that had not been published, because CDC had paid to keep it secret. This, my friends, is the definition of criminal conspiracy, racketeering and collusion. This is not a theory, this is evidence. You cannot have information in the future inform a treatment for a thing that did not exist.

In the 5th June, 2008 … Ablynx, which as you know is now part of Sinofi, filed a series a patents that specifically targeted what we’ve been told is the novel feature of the SARS Cov-2 virus, and you heard what I just said, this is the 5th June, 2008. Specifically they targeted what was called the polybasic cleavage site for SARS Cov, the novel spike-protein and ACE-2 receptor binding domain, which is allegedly novel to SARS Cov-2, and all of that was patented on the 5th June 2008. And those patents in sequence were issued between November 24th of 2015 which was US Patent 9193780, so that one came out after the gain-of-function moratorium, that one came after the MERS outbreak in the Middle-East, but what you find is that then in 2016, 2017, 2019 a series of patents all covering, not only the RNA strands, but also the subcomponents of the gene strands, were all issued to Ablynx.

... there was no outbreak of SARS, because we had engineered all of the elements of that, and by 2016 the paper that was funded during the gain-of-function moratorium, that said that the SARS coronavirus was poised for human emergence, written by none-other-than by Ralph Baric, was not only poised for human emergence, but was patented for commercial exploitation, seventy-three (73) times.

My favorite quote of this pandemic was a statement made in 2015 by Peter Daschek … reported in the National Academies Press publication, February 12th 2016, and I’m quoting

We need to increase public understanding of the need for medical counter-measures, such as a pan-coronavirus vaccine. A key driver is the media and the economics will follow the hype. We need to use that hype to our advantage to get to the real issues. Investors will respond if they see profit at the end of the process.

There wasn’t a lab leak. This was an intentional bio-weaponization of spike-proteins to inject into people to get them addicted to a pan-coronavirus vaccine. This has nothing to do with a pathogen that was released, and every study that’s ever been launched to try to verify a lab-leak is a red-herring.

(in response to Reiner Füllmich's summation, "so it's all about money")

It's always been about money.3 And just to answer a question that was asked slightly earlier, the script for this was written first (in) January 6th 2004.

Merck (later at 42:37 Martin clarifies that he misspoke, he meant to say "Moderna"), at the conference called 'SARS and Bio-terrorism'.

Merck (Moderna) introduced the notion of what they called “the new normal” which is the language which became the branded campaign that was adopted by the World Health Organization, the Global Preparedness Monitoring Board, which was the board upon which the Chinese Director of Center for Disease Control, Bill Gates’ Dr Elias of the Gates Foundation, and Anthony Fauci sat together on that board of directors. But the first introduction of “the new normal” campaign which was about getting people to accept a universal pan-influenza, pan-coronavirus vaccine was actually adopted January 6th, 2004.

In March of 2019 for reasons that are not transparent, they suddenly amended a series of rejected patent filings … they amended a number of patent filings to specifically make reference to an intentional or accidental release, I’m sorry their term ‘deliberate release’ of coronavirus. In March they amended four failed patent applications to begin the process of a coronavirus vaccine development.

In response to a question by legal professor, Martin Schwab, “could this Delta variant be some kind of media hype…”

There is no such thing as an alpha, or a beta or a gamma or a delta variant. This is a means by which what is desperately sought, is a degree to which individuals can be coerced into accepting something that they would otherwise not accept.

There has not been a single paper published by anyone that has actually established that anything novel since November of 2019 has clinical distinction from anything that predates November 2019. The problem with the seventy-three patents that I described is that those seventy-three patents all contain what was reported to be novel in December and January of 2019 and 2020 respectively.

(In response to a query by Dr Wodarg “we see that influenza has vanished, its gone”)

To which Dr Wodarg replies, “there are many more they can change”

Reiner Fullmich “but now we’re onto them”

For us it wasn’t hard to figure out that this was not a public health crisis. This was an opportunistic marketing campaign to address a stated objective, and that’s why this is Ockham’s Razor, it’s the easiest thing to describe, because they’re the ones that said it. And the Ockham’s Razor reality is they said they needed to get the public to accept a pan-coronavirus vaccine counter-measure, and they needed the media to create the hype, and investors would follow where they see profit.

You do not have anything else you need to rely on to explain the events of the last twenty months, than the actual statement of the actual perpetrator … if I have someone who says we need to use the media to hype a counter-measure, which is in fact the injection of a synthetic recombinant chimeric protein developed off a computer simulation, if I’m going to listen to the motivation for why that might be being done, I will listen to the person doing the manipulation who says, investors will follow where they see profit. I don’t need more explanation.